Eliminating gender violence is the aim of ‘16 Days of Action’, an international campaign which had a local launch in East Ayrshire this week.

East Ayrshire Council, along with East Ayrshire Violence Against Women Partnership and partner agencies, demonstrated their support at the campaign launch and pledged to support an end to gender-based violence.

Established in 1991, the 16 Days of Action is an international campaign, which aims to raise awareness of the issues around violence against women.

Although the campaign focuses specifically on male violence against women, it is recognised that men can also be subjected to many of these issues, as can people in same sex relationships, however, in the vast majority of cases these acts are carried out by men against women.

East Ayrshire schools, Ayrshire College, Police Scotland, NHS Ayrshire and Arran, East Ayrshire Womens’ Aid and Barnardos are among those who will be holding many events and activities over the 16 days to promote this important message.

Councillor Jim McMahon, East Ayrshire’s White Ribbon Champion, said: “My thanks go to everyone who came along to support the launch of 16 days of action.

“The campaign continues to grow every year with more and more people getting involved and speaking out about gender-based violence and we need to build on this momentum to bring about real change so that no man or woman has to experience domestic, sexual, emotional or physical abuse.”

East Ayrshire Council supports the campaign and is also an affiliated White Ribbon Local Authority Area. White Ribbon Scotland is a campaign to involve men in tackling violence against women. It is a joint initiative by a coalition of organisations, individuals and groups of men around Scotland. 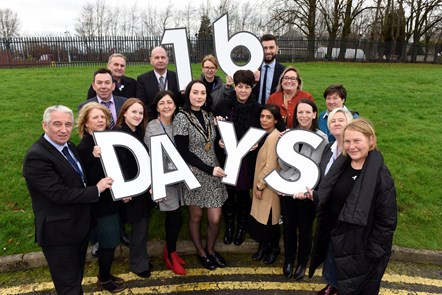