LGIU Scotland and CCLA are proud to announce that Councillor Claire Leitch of East Ayrshire Council has won a 2021 Councillor Award for Champion for Education.  The Councillor Awards are the only national awards to celebrate the vital contributions of local councillors across Scotland.

This evening, at the Awards ceremony that took place at Glasgow City Chambers and was streamed live on YouTube, Councillor Leitch won the Champion for Education Award. She was recognised for her determination and her representation of the youth voice in all decision making throughout the Council. Councillor Leitch was also celebrated for her work giving children and young people the power to shape council decisions.

The annual Councillor Awards is now in its 4th year and has continued to celebrate the best of local government. As communities continue to recover from the pandemic, these Awards are a hugely important way to champion what local councillors do for their communities.

Competition was particularly tight this year with close to 100 nominations received. The winners were selected by a group of judges that included senior councillors and leading stakeholders from across the sector. A link to re-watch the Awards is available HERE.

This year’s Awards were made possible thanks to the generous support of founding partners CCLA.

Jonathan Carr-West, Chief Executive, LGIU Scotland said: “We are incredibly proud to unveil the winners of this year’s Cllr Awards. These councillors showcase the best of local government across Scotland.

During a time when our communities have experienced unprecedented challenges and pressures, these councillors are paving the way towards recovery.

I would like to extend a huge congratulations to Councillor Leitch and all of tonight’s Cllr Awards winners.  We thank you for your service and look forward to hearing about your continued accomplishments in the future.”

Heather Lamont, Director of Client Investments at CCLA, said:  “We are proud to be the founding partner of the Councillor Awards. Working together with LGIU Scotland for the third year running, we always look forward to taking the opportunity to recognise and honour those leading across local government. This year has given the Awards new meaning. Local government has stepped up to the plate to deliver for communities across the country this year and we are honoured to stand alongside them.

Life as a councillor can be extremely rewarding – being at the forefront of positive community change. But of course, it's also extremely hard work, particularly in the current context.

The hard work done by councillors and council leaders behind the scenes to negotiate the best outcomes for their communities often never reaches the public eye. Which is why we think it's invaluable to set aside an evening each year to celebrate those achievements.”

The LGIU Scotland and CCLA annual Cllr Awards celebrate the vital work being done by councillors across Scotland. Past winners of the Awards can be found here. Rules for the nomination, shortlisting and selection process can be found here. Follow #CllrAwards for all updates.

CCLA is a leading specialist fund manager for local authorities and charities. When they began sponsoring the Cllr Awards they had 22 local authority client accounts. Today they have over 700 and this number is growing every month. CCLA are owned by their clients – their mission is to serve the whole sector, regardless of size. ccla.co.uk | info@ccla.co.uk

Leader of the Year

New Councillor of the Year 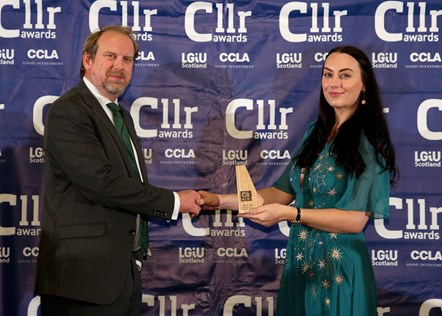