Depute Provost chooses charity to support for next two years

East Ayrshire Depute Provost Claire Leitch has chosen to support The Kris Boyd Charity for the next two years to help with its aims of encouraging and supporting people to engage with others when they really need help.

The charity was set up by Kris, a footballer who has just announced his retirement from Kilmarnock Football Club, after the tragic death of his brother Scott who took his own life in September 2016. The charity wants to raise awareness about tackling the stigma surrounding mental health and ultimately finding better solutions to mental health issues.

Depute Provost Leitch said: “I am pleased to be able to support The Kris Boyd Charity through the Provost’s office, and to be working with both the charity and officers from the Council to collectively agree the best way forward for raising both awareness and funds.

“The charity was set up to educate people on mental health and suicide and to get people to engage with others safely when they are in need of help, as well as promoting healthy lifestyles both mentally and physically.

“Making the coming year an even bigger and better one is one of the charity’s aims and it plans to expand and offer more services across Ayrshire, whether it’s helping to raise mental health awareness or giving financial help to various charities, businesses and support groups.

“The number of people completing suicide has risen by 15% in a year and it is one of the main causes of death in Scotland, with two people dying from suicide each day. It’s crucial that we do our part to help tackle the stigma around talking about our mental health and I look forward to doing all that I can to help make this happen.”

Kris Boyd said: “We have only been up and running for 18 months and the support and generosity we have received from all over Ayrshire has been overwhelming.

“This support from the Depute Provost is another indication of how serious a subject mental health is. Too many lives are being taken and it is deeply saddening.

“Together we can help to keep raising awareness and encouraging people to speak up and not to suffer alone or in silence. Remember, it’s OK not to be OK – that’s a very powerful and important message and one that we should all be spreading.” 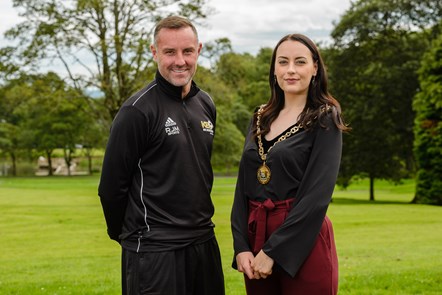