Kilmarnock’s B-listed Viaduct is set to be upgraded with a new lighting system that will cast the historic structure in beautiful new light.

Built in the heart of Kilmarnock town centre in the 1840’s, the viaduct was an incredible feat of engineering that reflected the town’s rise in prominence and wealth. The viaduct connected Kilmarnock to Carlisle ensuring that manufactured goods and coal could be easily transported south for home markets and to ports for export.

The impressive structure, based within the Conservation Area, was upgraded in 2008 with a lighting system that bathed many of the 23 arches in blue light.

Councillor Douglas Reid, Leader of the Council said: “In 2008 the iconic blue lights were installed at Kilmarnock Viaduct thanks to the determination of the late Councillor Jim Buchanan and a partnership between East Ayrshire Council, the Railway Heritage Trust and Network Rail.

“After a recent inspection of the existing lighting by the Ayrshire Roads Alliance, a decision was taken to design a replacement system that would make future maintenance of the lights more efficient and economical. The way the lights had been cabled made it difficult to replace individual lamps, which can lead to a whole system failure.

“The Alliance will now adopt the whole system and will install new colour changing LED lights with work starting on site on Monday 16 September. The project will be completed early in November, bringing a bit of light and colour to the darker nights.” 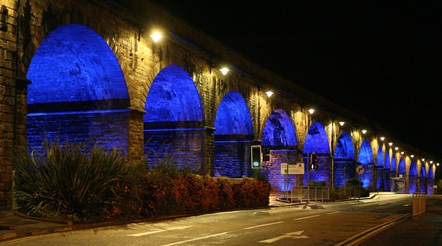