The roads infrastructure is one of the Council’s most valuable assets and is vital to the area’s economic well-being, contributing significantly to the local economy and regeneration.

The Ayrshire Roads Alliance’s Roads Maintenance Unit Section has designed a road-resurfacing programme covering 65km of local roads, which will ensure that resurfacing work focuses on the roads most affected by defects, potholes and surface fragmentation.

Teams will be resurfacing substantial stretches of road; moving away from temporary repairs. Since the resurfacing programme began at the end of May, 11.6km of road has now been resurfaced in communities including Ochiltree, Skares, Lawersbridge and Galston.

On Monday 29 July, the team will move to Auchinleck for a five-week period, where they will be resurfacing 330 metres of Ballochmyle Avenue, 370 metres of Glenshamrock Drive, 270 metres of Aird Avenue, 130 metres of Darnconner Avenue and 200 metres of Peden Drive.

In addition to this extensive resurfacing work, on Monday 29 July 1190 metres of the A713 Waterside to Patna will be resurfaced. On Monday 12 August, Newton Street in Catrine will be resurfaced followed by the full length of the B713 from Main Street, Sorn to B705 Catrine.

The Ayrshire Roads Alliance, on behalf of East Ayrshire Council, would like to apologise for any inconvenience caused by these essential works. 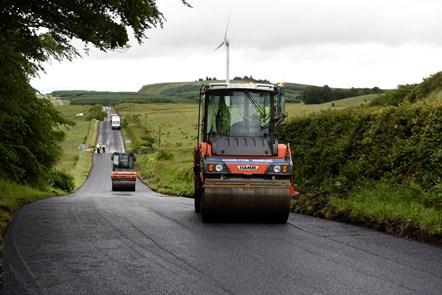