Ambitious proposals for Ayrshire that could transform the economic prospects for the region have taken a major step towards becoming a reality.

That was the message from the Ayrshire Growth Deal partners, which includes the three Ayrshire Councils and national agencies, with support from the private sector, following Friday’s visit by Lord Duncan of Springbank, Parliamentary Under Secretary of State for Scotland.

They are now hopeful they will soon secure much-needed funds from both UK and Scottish governments – which will help deliver a £300m package of investment in key assets and sectors that will not only positively impact Ayrshire but the Scottish and UK economies too.

During his visit, Lord Duncan was given a tour of three sites – Hunterston in North Ayrshire, Kilmarnock in East Ayrshire and Prestwick in South Ayrshire – and met with some of the partners involved.

The AGD partnership has been working on the development of the Growth Deal and its associated projects since Prime Minister Theresa May announced her commitment to the Deal in March.

When implemented, the projects will create thousands of jobs, build on Ayrshire’s assets and strengths and promote an economy where inclusive growth – creating opportunities for all – is at its core.

Speaking after the meetings Lord Duncan said: “It’s fantastic to see and hear about so many ambitious plans for unlocking Ayrshire’s potential.  Ayrshire has a huge amount to offer, from manufacturing to life sciences, to tourism and space.

“I want to see a Growth Deal that is inclusive and enriches the whole of Ayrshire and it’s clear from today that there are real opportunities to bring transformative investment to achieve just that.

“The UK Government has already committed £3.5m to the HALO Kilmarnock project and I am determined to see a wider Ayrshire Growth Deal become a reality.”

Councillor Joe Cullinane, Leader of North Ayrshire Council, said: “We are now closing in on concluding a deal and feel this could now be a matter of weeks away.

“This is incredibly exciting for not only those involved in the projects but for the whole of Ayrshire. We have been pushing for this Ayrshire Growth Deal relentlessly because we absolutely believe in it and what it will mean locally and on a wider scale.

“We are sure Lord Duncan enjoyed his visit and will have been impressed with our proposals.”

“As part of his visit to East Ayrshire, Lord Duncan viewed the Ingram Enterprise Centre in Kilmarnock, an innovative facility for new and expanding businesses and heard about a proposed new energy project for the Cumnock area. This exciting project will see research into new electricity generation and storage technologies with the aim of forming a local distribution grid.

“A presentation on an Advanced Manufacturing Investment Corridor within Ayrshire was also well received.

“Lord Duncan’s visit was very welcome. Our proposals are reaching the final stage of development and we are hopeful that a deal will be reached in the near future.”

Councillor Douglas Campbell, Leader of South Ayrshire Council, added: “It was great to not only highlight the Growth Deal proposals for Prestwick to Lord Duncan, but to showcase the passion, drive and determination across both the public and private sectors in Ayrshire to deliver on our Growth Deal ambitions.

“These ambitions will deliver inclusive growth, unlock investment, create thousands of jobs, provide new business infrastructure and well and truly establish Ayrshire as an accessible and connected region that punches well above its weight in terms of what we contribute to the economy.

“We’re at a very exciting point for the Growth Deal and ready to hit the ground running to bring these incredible and transformational projects to life.”

During his tour of Hunterston, Lord Duncan met with representatives from Peel Ports,  North Ayrshire Council and Strathclyde University to explore the potential within the site as the team explained how fresh investment and a redeveloped facility would create high-value jobs in a variety of sustainable,  and technological industries.

In Kilmarnock, Lord Duncan met representatives from East Ayrshire Council and the business community and discussed both the development of a National Energy Research Centre and the Advanced Manufacturing Investment Corridor.

In Prestwick, Lord Duncan visited BAE Systems – a key partner in the existing aerospace cluster around Glasgow Prestwick Airport – where he heard more on the plans for aerospace and space innovation and expansion, including proposals for the UK’s first spaceport for horizontal space launch. South Ayrshire Council and representatives from the aerospace industry talked through the benefits this would bring to people, businesses and communities. 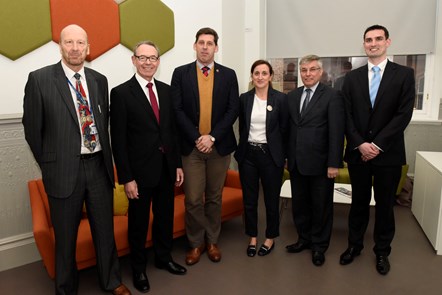