Depute Provost Claire Leitch presented a prize hamper this week to the winner of the Kilmarnock Town Centre Mouse Trail which ran over the October school holiday.

15 local businesses took part in the trail which involved over 200 children finding little felt ‘Button’s Mice’ in shop windows throughout the town centre and learning about keeping everyone safe along the way. The overall winner was 7 year-old Emily Officer from Kilmarnock who won a hamper full of goodies.

Devised by the East Ayrshire Protecting People Team, Button’s Mice is an interactive activity that encourages children to talk and think about any issues which may be concerning them. ‘Mouse boxes’ are put into schools to encourage children to draw pictures or talk to the mice about anything that is worrying them. The issues may be ones which children find difficult to put into words, or may not be aware of. Button’s Mice builds on the principles of therapeutic play as well as current research about children and the impact neglect has on their lives.

The resources consist of a book containing the story of Button’s Mice, an activity pack, a cardboard mouse house with furniture in it and several adult and child felt mice.

The story focuses on a tiny mouse called Button who has an idea about how to help the children he sees in the houses he visits. Button gets the confidence to speak up at the annual Mouse Gathering and expresses his concern for the children. A plan is agreed and the mice decide to put mouse houses into schools and places where children need to talk about their concerns.

A set of Mouse Rules are incorporated into the story which set out a list of things which no child should have to endure or live with. Some of these include not being left alone for long periods of time and not being told they are no good. The Mouse Rules also link to the United Nations Convention of the Rights of the Child.

The Activity Pack has many more stories and activities covering issues such as hunger, bullying, making friends, living with older people, as well as fun stories about sleepovers and cheese stores.

Button’s Mice are individually hand made from felt so each one is unique and has its own personality which helps children to identify with them more.

Depute Provost Leitch, who is also Children’s Champion, said: “The town centre mouse hunt was a great success. Thanks to all of the businesses who took part and well done to Emily on being the winner. I’ve heard so many positive stories about the mice and how much children love them, and how they communicate with them about their concerns through pictures and letters.

“The mice idea is a great one because children often relate better to toy animals than they do to humans or even toy dolls. A felt mouse can be a child’s friend, without demanding anything in return. The mouse character can say what a child thinks and feels, and share in a child’s challenges, loneliness, and sadness. It can also show a child that there are adults who want to help them to be safe and provide hope. I hope to see this fantastic project expand further to help more children in the future.” 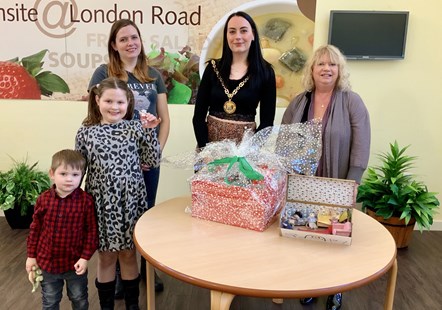