Ochiltree and Catrine get placemaking approval

Plans for the future of land use in Ochiltree and Catrine took a step forward this week as East Ayrshire Council’s Cabinet approved the latest stage in the Placemaking processes for the two communities.

Placemaking is a process which takes Community Led Action Plans, produces maps highlighting areas for future development and improvement within a community and consults with local people, businesses and community groups to identify priorities for action within those areas.

Placemaking maps and actions, as identified during the formation of Community Led Action Plans, typically involve four engagements with the public, starting with a walkabout with a small number of community representatives to identify the location of main priorities. These are followed by a “Talking Pictures” exercise with a wider group of local reps. This involves listening to and recording the group’s main comments while they view over 70 slides featuring photographs of the main priority areas. Feedback on these comments is then sought from internal Council stakeholders, East Ayrshire Leisure Trust and the Ayrshire Roads Alliance.

This evidence is then used to produce draft maps and actions which are then agreed by members of the group. At this point the materials are then put out for a 6 week informal consultation advertised in the press, on the Council website newspage and social media. It was undertaken via web pages and online surveys, consultation events held in the communities and paper copies distributed through Council offices.

For both Catrine and Ochiltree, these stages are all now complete.

In Ochiltree, the Placemaking plan focuses heavily on streetscape improvements, including measures to reduce the impact of HGV traffic and improvement and increased provision of safe walking and cycling routes to Barony A Frame and Dumfries House. The Community Centre which is currently under construction and the Church Hall were identified as key buildings and emphasis was put on the need to improve broadband speeds, green spaces and parking provision.

In Catrine, the rich industrial and built heritage play a key role in the plans, with protection of the historic core and improvements to the housing on St Cuthbert’s Street identified as key priorities. The former Corner Bar and the AM Brown Institute were also earmarked for attention, as were four gap sites, recommended for improvement or development.

As in Ochiltree, walking and cycling were also given high priority, particularly in relation to the River Ayr Way which runs through the village. Civic spaces both in the centre of the village and in the housing estate to the east of the village were also mentioned.

The Cabinet approval means that the process can now move on to the next stage. Councillor Jim Roberts, Cabinet Member for Infrastructure and Economy explains: “We had a good response to the consultations, with some very encouraging and constructive comments. Now that we’ve had Cabinet approval of the finalised maps, the Placemaking Plan will now be submitted to Scottish Ministers as proposed supplementary guidance to our East Ayrshire Local Development Plan (EALDP). They will then have 28 days to scrutinise the proposals, after which we hope it will be adopted as part of our EALDP for both Catrine and Ochiltree.

“What this means in practice is that when planning decisions or grant funding applications are being made in future, our planners have a clear vision of what is best for each of our communities, as decided by the people themselves. It’s a great way to ensure that communities evolve and have the best chance of attracting funding for vital projects that are in their best interests, doing what’s right for the people who actually live, work and visit there and putting decision making back at the heart of our communities where it belongs.” 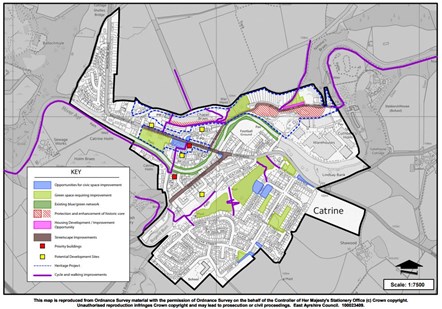 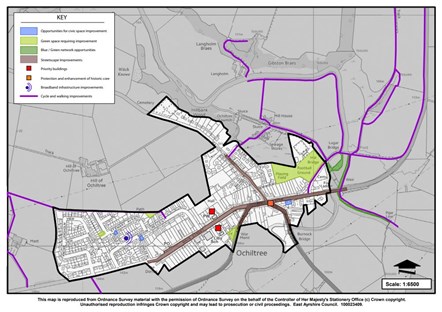 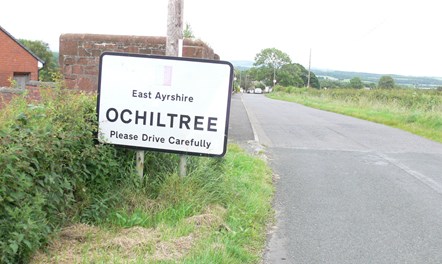