‘Here to Listen’ seeks to break the stigma of suicide and get people talking openly about their mental health.

David Dornan and Jane McKie from the Council’s Health and Safety Team were joined by PC Craig Marshall at a recent Pub Watch meeting in the Brass and Granite pub in Kilmarnock where they distributed suicide prevention Z cards and suicide support directories, which have been developed as part of the 'Here to Listen' suicide prevention campaign.

Patrons going to local bars and clubs involved with the Pub Watch scheme will now see suicide prevention Z cards prominently displayed on bars and are encouraged to take one. They contain helpful information and contact numbers for anyone who needs support and can be referred to when people need to speak to someone.

David Doran advised: “I am delighted to have the support of the Police and local licensed premises involved with the Pub Watch scheme, supporting our ‘Here to Listen’ campaign out into our local communities.

“The main aim of the Pub Watch scheme is to encourage safe, secure and responsibly led drinking environments where people can go to enjoy themselves. This aim perfectly complements our campaign, as we all have a social responsibility to keep people safe from harm.

“Suicide is not inevitable; by working together and raising awareness of the subject we can finally break the stigma around suicide and get people talking about how they are feeling and their mental health”. 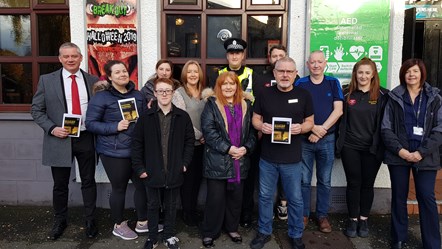