Maths pupils in S3 at Grange Academy recently got their hands on an exciting piece of history - an original Enigma machine - used by the German military to send coded messages to each other during WWII.

Invented in 1923 by German, engineer, Arthur Scherbius, the Enigma machine was designed to help commercial companies send more secure communications – but realising its military potential, it was soon adopted by the German navy (1928) and army (1933).

The machine was demonstrated as part of a national tour (The Enigma Project) undertaken by Dr James Grime, an expert on the Maths of code breaking who can regularly be seen on the Numberphile YouTube channel.

He showed pupils how five cylinders in the machine, each with different letters, could be turned to scramble messages – and how these encryptions could then be decoded by another Enigma machine receiving the encoded message.

Pupils heard many colourful stories during the demonstration of the Enigma Machine and learned how the famous British mathematician and father of computing, Alan Turing, developed his incredible ‘Bombe’ machine to unscramble the Enigma machine’s coding mechanism and to crack the German code.

The workshop and the machine was a big hit with the S3 pupils.

Louise Nichol said: "It was amazing to hear about this machine. I didn't know anything about how Maths helped to win World War Two!"

Cameron Cairns added: "I couldn't believe that such an antique machine could be so complicated!"

Mikey Robb said: "The letters on the machine would light up when you pressed a key but the letter connections were constantly changing- no wonder it was so hard to crack the code!"

Lewis Barnie added: "James Grime was very enthusiastic as he told us the story of the team at Bletchley Park. They must have been geniuses to figure out how to break the ever-changing Enigma Code.”

Chris Smith, maths teacher at Grange Academy commented: “We had a brilliant day. James was a superb and engaging speaker and it was absolutely fascinating to think that the machine we were seeing and actually getting to use, had played such a key part in German military strategy.

"In fact, it was really quite humbling and the role mathematics played in bringing the War to an end  played cannot be over stated."

Councillor Fiona Campbell, East Ayrshire Council's Cabinet Member for Skills and Learning added: “The Enigma Project aims to inspire interest in mathematics, science and history and the interactive presentations plus hands-on workshops focusing on codes and cryptography are a brilliant way to learn.

“Dr Grime gave pupils a real-world insight into how mathematics can have applications far beyond the classroom,  offering experiences and insights that fired the imagination and really got our pupils thinking.

"In this case, they learned that mathematics applied to cryptography, quite literally helped to save the World and what an extraordinary thought that is!"

Dr James Grime is a mathematician with a personal passion for maths communication and the promotion of mathematics in schools and to the general public.

He has a PhD in mathematics and has a keen interest in cryptography (the mathematics of codes and secret messages), probability (games, gambling and predicting the future) and number theory (the properties of numbers). 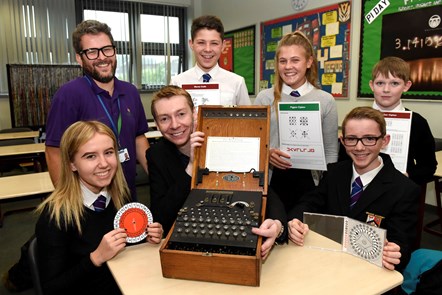 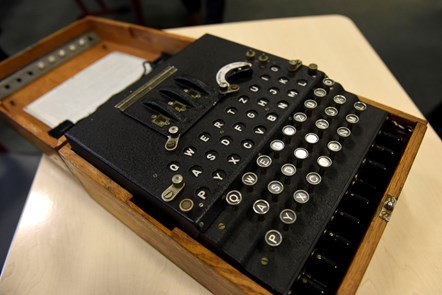 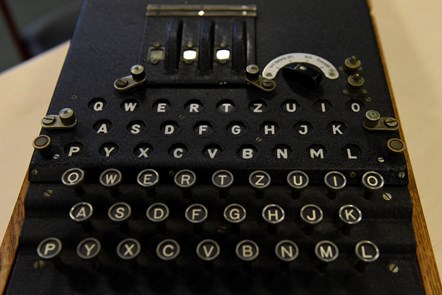 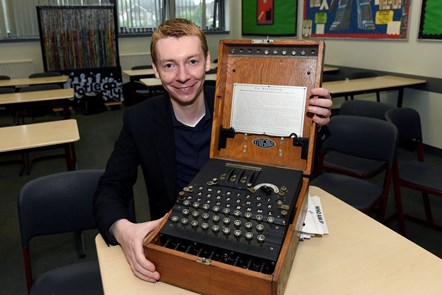