The establishment of the Regional Partnership was agreed by the three Ayrshire Councils last year and is designed to oversee the development and implementation of a new regional strategy for economic growth as well as to provide the governance arrangements for the Ayrshire Growth Deal which recently secured £251m of public sector investment.

The first Board meeting saw representatives of the three Councils come together with senior staff from national agencies such as Scottish Enterprise, Skills Development Scotland and VisitScotland. While education was represented by Glasgow University, the University of the West of Scotland and Ayrshire College.

Discussion focused on the priorities for all partners to support Ayrshire’s economy and members heard from key speakers including Dr Graeme Roy, Director, Fraser of Allander Institute and Stephen White, Head of Economic Partnerships at the Scottish Government.

Board members have agreed to meet every two months and their work over the next 12 months is expected to focus on the new strategy and action plans and the completion of an implementation plan for the Growth Deal so that projects can commence in 2020.

Following an open recruitment process which attracted significant interest, Alasdair Dobson from Taste of Arran; Simon Foster from Spirit Aerosystems and Craig Hume from Utopia Computers have been appointed to the Board to represent the views of business.

These appointments have been supplemented with the inclusion of representatives from both the Chamber of Commerce and the Federation of Small Business – both of which have Ayrshire membership of more than 600 businesses.

Councillor Douglas Reid, Council Leader and Chair of the Economic Joint Committee which will oversee the Partnership Board reiterated the importance of this work and acknowledged that ‘last week’s meeting was another momentous occasion in Ayrshire and a key milestone in the ambitions of Councils and Government to collaborate to support economic growth across the region for the benefit of all communities.’

Details of the Partnership discussions will be accessible via the websites of each Council. Further details on the Ayrshire Growth Deal can be found at www.ayrshire.gov.uk/AyrshireDeal. 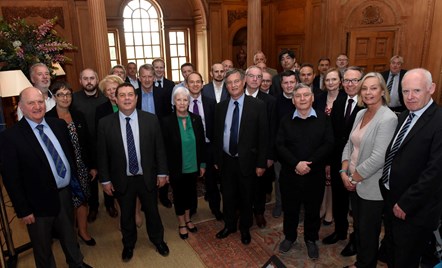