A public service of remembrance was held this week to commemorate the 70th anniversary of the Knockshinnoch mining disaster and rescue.

The 1950 tragedy took place in New Cumnock when a glaciated lake filled with liquid peat and moss flooded pit workings at the mine.

This trapped more than one hundred miners underground for several days and tragically, 13 people died as rescue teams worked tirelessly to reach the trapped workers.

The disaster was an international media event and one of the worst disasters in Scotland's mining history, yet somehow 116 men were rescued on the third day in one of the most remarkable rescues ever attempted.

Councillor Douglas Reid, who attended the service with Depute Provost Claire Leitch, said: “Although so many were miraculously rescued, we remember every year, and especially on this 70th anniversary, those who sadly couldn’t be saved.

“The story of what happened at Knockshinnoch is one that not only still resonates with local people, but it has been used over the years by those who teach present-day rescue techniques. I was honoured to have been a part of this service along with members of the community and pupils from New Cumnock Primary School.” 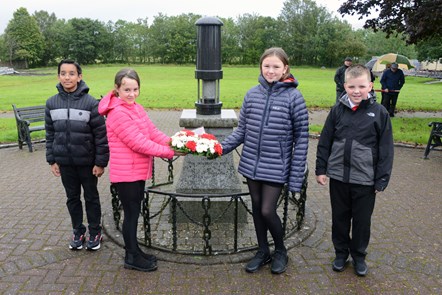