Liz had been awarded the BEM by Her Majesty in October 2020 for services to Education and Sport in East Ayrshire, but due to Covid-19 the presentation only took place this week.

The presentation was filmed by the Council’s IT service and beamed live to all the classrooms in the school to ensure that everyone could be part of Liz’s special day.

Provost Jim Todd attended the presentation. He said: “I was delighted to offer my congratulations to Liz on behalf of the people of East Ayrshire and to thank her for her lifelong dedication to public service. ‘Services to Education and Sport’ is a very short way of saying that Liz has been recognised for changing, and saving, lives in her local community. She started an afterschool swimming club with Ochiltree Primary Parent Council to help raise awareness of water safety and to encourage local children to learn to swim.

“Since the club was formed in 2004, she has literally taught hundreds of children the lifesaving skill of swimming. Liz has dedicated her life to others and I am very glad that East Ayrshire has had the benefit of her warm and generous spirit.”

Liz Shannon said: “Since I was a teenager I have always been involved in working with young people. I was a Brownie Leader. After I was married and had my three sons I became a Beaver Leader. I organised many activities and days out for the children.  I encouraged my sons to join local clubs and became involved with them. I ran Doon Valley Swimming Club for a wee while until I had to give up through illness.

“The afterschool swimming club was the biggest and most successful of any of the clubs I ran. It was set up originally to raise awareness of water safety and the importance of being able to swim.

“Originally, the club was only for pupils from P4-7 and very few could swim lengths of the pool. It is fair to say that the club has gone from strength to strength and as the swimmers progressed and further pool time secured, pupils from P1-3 were also allocated places. Due to the depth of Auchinleck Pool P1 was added in as a Parent/child class. This was very successful and soon I felt confident to offer places to pre-school children and babies, although these too were parent/child classes. As our swimmers got older and became competent swimmers, gradually they replaced the parents in the water, once they had passed the necessary qualifications.

“The success of this club is based largely on team work and the willingness of parents and older pupils to work with me and gain the necessary qualifications become swimming teachers and lifeguards. Their hard work and dedication was second to none. This was a great team effort with me leading the way. Their belief in my ability to organise and develop the club has been amazing. Fantastic teamwork. The parents and children of Ochiltree Primary School have helped and supported me through some very difficult times, such as illness, trauma and bereavements.

“In addition, throughout all of this my family have supported and often helped out along the way.” 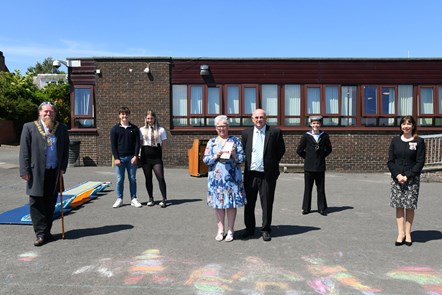 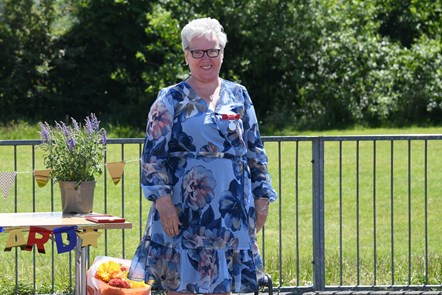 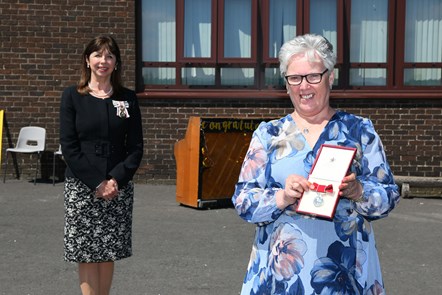 Liz Shannon with the Lord-Lieutenant