The Roon the Toon Jim Buchanan Memorial trophy has been presented to the fastest East Ayrshire Council and East Ayrshire Leisure female and male employees at a special presentation.

Provost Barry Douglas with Ian Gebbie and Matt Dodds from the Kilmarnock Harriers presented Gail and Mark with their trophies and prize money.

Provost Douglas, who attended Roon the Toon and was given the honour of starting the race, said: “It was a real privilege to present the Jim Buchanan Memorial Trophy to Gail Henderson and Mark McCormack and congratulate them on being our fastest employees. We really shouldn’t have been surprised though as Stewarton Academy’s team, which consisted of staff, parents and pupils, won fastest school the last time Roon the Toon took place back in 2019.

“The presentation was a great opportunity to remember our friend and fellow elected member Jim Buchanan. Jim shared the vision the Kilmarnock Harriers had to raise the profile of the town through sport. He could see the benefit of attracting thousands of people to the area and the positive impact that this would have on East Ayrshire. It is absolutely fitting that the Jim Buchanan Memorial Trophy is presented annually to our fastest employees.” 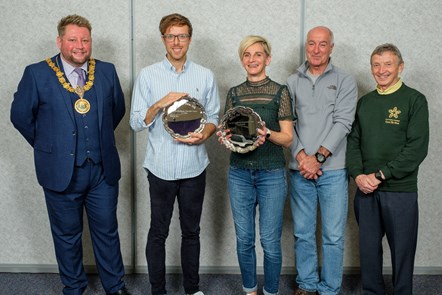