Scotland’s new Director General for Economy, Louise Macdonald OBE spent Wednesday in Ayrshire, where she visited some of the work being carried out as part of the transformational Ayrshire Growth Deal.

She also discovered more about the variety of projects which are expected to drive forward economic growth in Ayrshire and the wider economy over the coming years.

The day kicked off with meeting of representatives from the Ayrshire Regional Economic Partnership at the Park Hotel, Kilmarnock, where she received a brief overview of the economic strategy and principles driving the Growth Deal.

After a question and answer session, Ms Macdonald was taken to the HALO project in Kilmarnock where she given a tour of the £11m facility - recently voted Scotland’s best regeneration project - designed to maximise collaboration between entrepreneurs and UK PLCs. The project has received £9m of Growth Deal funding.

The Growth Deal team introduced Ms Macdonald to some of the pan-Ayrshire projects – such as Working for a Healthy Economy, Community Wealth Building and Ayrshire Skills – that will be instrumental in reshaping and boosting Ayrshire’s workforce and position as a regional economy.

Ms Macdonald then moved on to visit Hunterston, in North Ayrshire, which is an important strategic site in terms of supporting Ayrshire’s net zero transition aspirations.

With its cluster of marine and infrastructure assets that are unique in Scotland and recognised as a national scale development site in the draft national planning framework, Hunterston is seen as a site that can be a catalyst for a local, national and international boom in the marine sector.

As well as the long-term plans for Hunterston, a £10.5 million marine science centre is also earmarked for Ardrossan. The new International Marine Science and Environmental Centre (IMSE) will be based at Ardrossan and will ensure that the Firth of Clyde is recognised a leading player in the Blue Economy and marine sustainability.

The Director General also learnt about plans to create an innovation ecosystem which would have Hunterston, IMSE and DPMC,  the new Digital Process Manufacturing Centre set to launch later this year, as three connected  innovation centres set to benefit businesses and communities with an opportunity to develop business competitiveness and growth, develop the skills of our communities with the latest technology and digital solutions and create good quality sustainable jobs.

On Tuesday, Ms Macdonald joined Ivan McKee MSP to visit some of the key strategic sites for the Growth Deal in South Ayrshire as part of a separate visit to local businesses in the region, including Prestwick Airport and Spirit Aerosystems - both key players in Space and Aerospace themes of the Deal.

Louise Macdonald said: “Ayrshire embodies what the Scottish Government is aiming to achieve through its National Strategy for Economic Transformation. The region is taking an inclusive and collaborative approach to economic development so communities, businesses and the people of Ayrshire all benefit.

“Innovative manufacturing projects at Hunterston and Prestwick, along with projects breaking down labour market barriers for people struggling with health conditions highlight regional partners are making sure investment adds value for Ayrshire.

“I was impressed that Community Wealth Building is being put at the heart of Ayrshire’s long term economic strategy. This approach will ensure that Ayrshire businesses are used to deliver projects, that Ayrshire people get the jobs, and that the Ayrshire economy realises its potential.”

Councillor Martin Dowey, Chair of the Ayrshire Economic Joint Committee said: “We were delighted to welcome Ms Macdonald and outline some of the exciting work being carried out by the Growth Deal team.

“The visit couldn’t come at a more poignant and important time, with business and communities still recovering from the impact of the pandemic and now struggling to deal with the cost-of-living crisis. Partners behind the Ayrshire Growth deal are determined to make real and long-term positive change to lives of our communities.”

“The last year has seen us put things in place that will provide a platform for us to bring projects to fruition over the coming years.

“The Growth Deal has the potential to change the very landscape of our economy and we are determined to deliver for businesses and people of Ayrshire.” 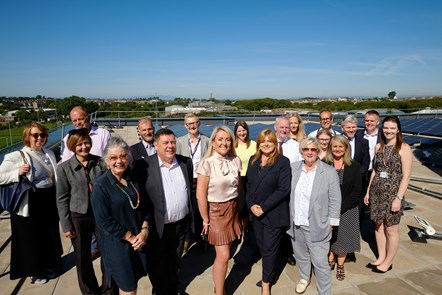