Pupils from schools across South Ayrshire took part in a competition recently to name some of the Ayrshire Roads Alliance’s gritters.

The Alliance has launched a new online feature called, Track my Gritter, which allows residents to track gritters operating in their area during the winter months.

For a bit of fun, local pupils were asked to name gritters featured on the map and they did not disappoint. Hundreds of inventive names were submitted and the winners were Sleeting Beauty, True Grit, Snow Glitter, Ice Hunter, Ice King and Levi.

Councillor Ian Cochrane, South Ayrshire Council’s Portfolio Holder for Environment said: “The children came up with some amazing names. It was difficult to choose the winners. However, one name really stood out. The children of Cherry Tree Early Years Centre in Ayr asked if one of the gritters could be called Levi. Levi (aged 4) goes to the early years centre, he loves large vehicles and his class friends knew how much he would enjoy tracking a gritter named after him.

“I was delighted to attend Cherry Tree, to present the class with a framed photo of Levi the Gritter and a sledge for Levi and his family.”

All the gritters have been named virtually, on the Track my Gritter map and, just for the children, have had their name printed on the front of each vehicle. The winning schools – Barassie Primary, St Patrick’s Primary, Minishant Primary, Crosshill Primary and Barr Primary will receive a visit from their named gritter within the next week.

Councillor Cochrane continued: “Track my Gritter is a great resource for our residents. During the winter months, our gritters can be out in all weathers, with teams from the Alliance providing an excellent service to our local communities day and night. For the first time, you can now follow the gritters operating in your area.

“The system, which is available on the Ayrshire Roads Alliance website, will provide a bit of reassurance to communities and also give an insight into the extensive gritting service provided by the Alliance during the winter months.”

The Ayrshire Roads Alliance is not responsible for Trunk Roads. Scotland TranServ is responsible for all trunk road maintenance, including the winter service on the A76, A77 (from south of Fenwick) and A78 trunk roads in East and South Ayrshire. 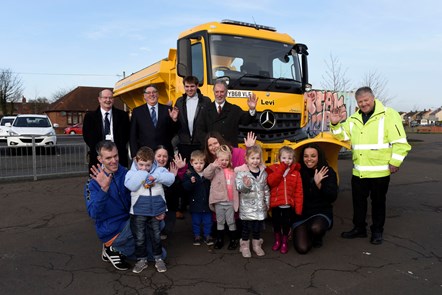 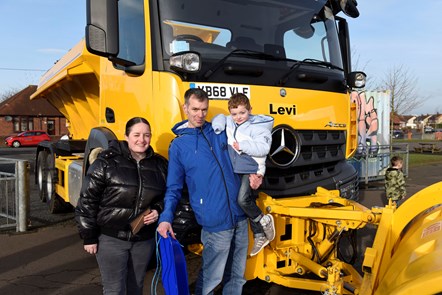 Levi with his mum and dad