“It’s ok to say that you aren’t ok” that was the message from former footballer Andy McLaren who represented the Kris Boyd Charity at East Ayrshire Council’s suicide prevention awareness event, Here To Listen.

The event included speakers from East Ayrshire Health and Social Care Partnership, Samaritans, local charity Beautiful Inside & Out, the Branching Out Community Initiative based in Northwest Kilmarnock and the Kris Boyd Charity.

Linda Surgenor, senior manager from the East Ayrshire Health and Social Care Partnership, explained the pan-Ayrshire approach to reducing suicide and the challenges facing local authorities and the NHS.

One in three people in Scotland who complete suicide have not been in contact with mental health services in the previous 12 months. However, they may have been in touch with primary care or community groups and Linda’s team is committed to learning more about this preventative approach.

Linda also spoke about East Ayrshire HSCP’s priorities and the power of Hope – Humanity, people at the heart of everything we do/ One life is too many/ Plans disrupted/ Everyone empowered to prevent.

The priorities will be achieved through focused support to high-risk groups, national learning following reviews of all deaths by suicide, training targeted at the right people and developing our community champions.

“People can find it difficult to talk about how they are feeling. We are taught to ‘be brave’ and bottle up our emotions but we need to talk and it is ok to say, I’m not ok. No one will ever be judged by the Samaritans, we are so honest and open, you can talk to our listeners about anything for free, 24hours a day on 116 123.”

Local charity Beautiful Inside & Out was represented by Helen Cosgrove, a counsellor for the charity. Pauline Moriarty established the charity after she lost her beloved daughter Jenna to suicide at just 13 years old. Pauline, devastated by this terrible loss, set up the charity to ensure that local families affected by suicide could receive help and support.

The charity provides play, music and art therapy for siblings and counselling sessions for the whole family, ensuring that all financial barriers are removed allowing people to access support at the most difficult of times.

Helen read a message from Pauline about Jenna and her charity. Helen read: “Jenna was beautiful, intelligent, altruistic, hilarious and compassionate and I told her she was beautiful inside and out. When she sat down and told me everything that was happening to make her upset and hurt, Jenna said she felt she no longer had a voice; we talked and ended things on a positive note but less than 46 hours later she ended her precious life.

“It was absolutely devastating and still is. I set up Beautiful Inside & Out in Jenna’s memory to create something positive out of tragedy. We make sure that all our services are free to remove barriers to support and ensure that our young people have a voice. If we save even one life it will mean that all our pain was not for nothing.”

The next speaker was Margaret Boyd who has been working with Vibrant Communities, Outdoor Services and East Ayrshire Woodlands to carry out a community clean up at the Mount in Knockinlaw.

Margaret lost her beloved son to suicide and was determined to create something positive from the tragedy. She has organised litter picks and clean ups involving the Council, the community, the North West Community Action Plan Group and Centre Scotland Green Network. She said: “I truly believe that something good has to come from this terrible tragedy. The work we have carried out in our local community has been amazing. We have empowered the community and individuals, increased community pride and created a belief that our communities have the ability to change things around them.

“As we move forward, I would like to see an increase in volunteering opportunities and work more closely with partner organisations to share funding and volunteer opportunities.”

Andy McLaren closed the event speaking on behalf of the Kris Boyd Charity. Kris started the charity after his brother Scott tragically took his own life in 2016 to raise awareness of mental health issues. Andy spoke candidly about his own experiences, losing his dad to suicide when he was just 16 years old and attempting suicide himself. He talked about reaching out to friends, colleagues and family members if they seem to be acting out of character and the importance of being able to say, “I’m not ok”.

Councillor McMahon said: “In East Ayrshire, we are committed to raising awareness of suicide and encouraging people to talk openly about their feelings, which is often the first step to staying safe. Suicide prevention is everyone’s business and it can be preventable, anyone can act on the signs that they may see in others.

“This is why the Council, through a strong partnership between Vibrant Communities, Health and Safety and the East Ayrshire Health and Social Care Partnership, is providing safeTALK and Applied Suicide Intervention Skills Training First Aid courses to our employees and local community groups.

“I was delighted to welcome so many community groups to our event and to provide an opportunity for people to network and share learning. One life lost to suicide is one life too many but together we can make a difference.”

The event was attended by Centrestage, Crosshouse Community Council, Above Adventure, Ayrshire Warriors, the Kilmarnock Standard, representatives from the local Trade Unions and colleagues from across the Council who have trained as suicide first aiders.

David Doran, Health and Safety Manager said: “Here To Listen is the Council’s suicide prevention strategy and it has three main aims:

“For the Council, Here To Listen is just the beginning. We recognise the excellent work being carried out in our communities and I know from talking to groups and individuals who attended our event that bringing people together to learn and share experiences is vital in tackling suicide. I would ask anyone who is currently working in their community supporting those in crisis to contact me on 01563 576095 or email david.doran@east-ayrshire.gov.uk so that you can be registered on a community network and invited to future networking events.”

Chief Inspector Gillian Docherty said: “East Ayrshire Council’s Here To Listen event was an opportunity for partners, including the community to come together to talk frankly about suicide, about loss and trauma but most importantly how we can all work together to raise awareness and in turn reduce the number of deaths by suicide.

“Suicide is a national issue, it is the biggest killer of men under the age of 50. Police Scotland is committed to working with partners to reduce the number of deaths by suicide, even one life lost to suicide is one life too many.” 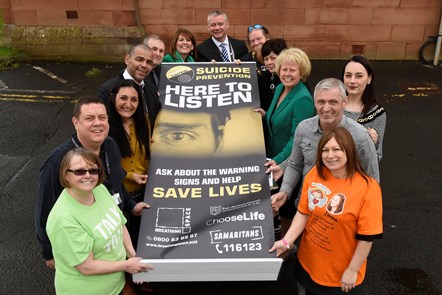