A series of open days have been held across East Ayrshire this week in support of Challenge Poverty Week, a campaign that’s run every year by the Poverty Alliance.

The aim of the week is to raise awareness of poverty and the effects it can have on individual lives, as well as highlighting what support is available and what we can all do to tackle poverty.

Organised by East Ayrshire Health and Social Care Partnership’s Financial Inclusion Team and a variety of partner organisations from the third sector as well as statutory bodies, the open days provided an opportunity for people to come along and find about benefits they may not have realised they’re entitled to, or just to find out more about the effects of poverty.

Councillor Jacqui Todd, Cabinet Spokesperson for Housing, Welfare and Poverty, said: “Poverty can affect people in many ways. It’s not just about the lack of money; it can be poor housing, difficulty in paying fuel bills or the daily effects that poverty can have on children and the longer term effects on their education and future employment prospects.

“Poverty affects those in work as well as those on benefits, with official figures showing that almost 70% of children living in poverty today have at least one member of their household in employment.

“We hope we’ve been able to help many people this week by providing support or advice, or by encouraging people to add their voices to the campaign to end poverty.”

Photo caption: representatives from the open day at the Dumfries Arms Hotel in Cumnock. 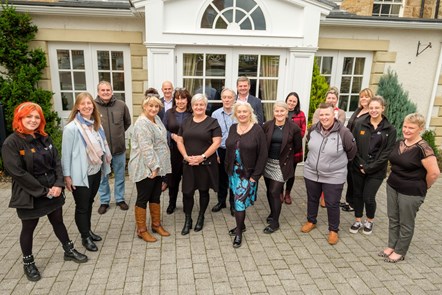